What does MobX react to?

MobX usually reacts to exactly the things you expect it to. Which means that in 90% of your use cases mobx "just works". However, at some point you will encounter a case where it might not do what you expected. At that point it is invaluable to understand how MobX determines what to react to.

MobX reacts to any existing observable property that is read during the execution of a tracked function.

In other words, MobX will not react to:

To elaborate on the above rules with an example, suppose that you have the following observable data structure (observable applies itself recursively by default, so all fields in this example are observable):

In memory that looks as follows. The green boxes indicate observable properties. Note that the values themselves are not observable! 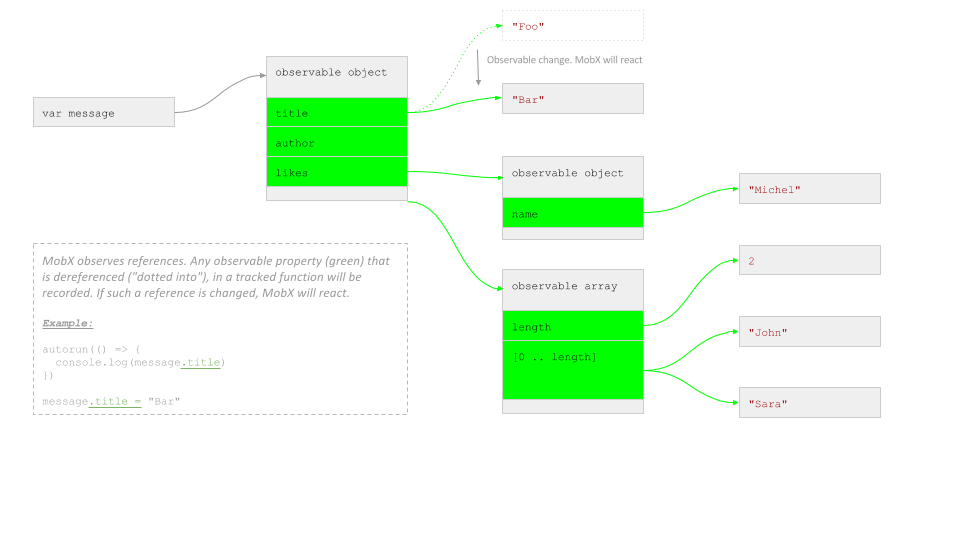 Now what MobX basically does is recording which arrows you use in your function. After that, it will re-run whenever one of these arrows changes; when they start to refer to something else.

Let's show that with a bunch of examples (based on the message variable defined above):

Correct: dereference inside the tracked function

This will react as expected, the .title property was dereferenced by the autorun, and changed afterwards, so this change is detected.

You can verify what MobX will track by calling trace() inside the tracked function. In the case of the above function it will output the following:

It is also possible to get the internal dependency (or observer) tree by using the designated utilities for that:

Incorrect: dereference outside a tracked function

This will not react. message.title was dereferenced outside the autorun, and just contains the value of message.title at the moment of dereferencing (the string "Foo"). title is not an observable so autorun will never react.

Correct: dereference inside the tracked function

This will react to both changes. Both author and author.name are dotted into, allowing MobX to track these references.

Incorrect: store a local reference to an observable object without tracking

In the above example, the updated message title won't be printed, because it is not used inside the autorun. The autorun only depends on message, which is not an observable, but a constant. In other words, as far as MobX is concerned, title is not used in- and hence not relevant for the autorun

The fact that console.log will print the message title is misleading here; console.log is an asynchronous api that only will format its parameters later in time, for which reason the autorun won't be tracking what data the console.log is accessing. For that reason make sure to always pass immutable data or defensive copies to console.log.

The following solutions however, will all react to message.title:

This will react as expected. .length counts towards a property. Note that this will react to any change in the array. Arrays are not tracked per index / property (like observable objects and maps) but as a whole.

This will react with the above sample data, array indexers count as property access. But only if the provided index < length. MobX will not track not-yet-existing indices or object properties (except when using maps). So always guard your array index based access with a .length check.

This will react as expected. All array functions that do not mutate the array are tracked automatically.

This will react as expected. All array index assignments are detected, but only if index <= length.

Incorrect: "use" an observable but without accessing any of its properties

This will not react. Simply because the likes array itself is not being used by the autorun, only the reference to the array. So in contrast, messages.likes = ["Jennifer"] would be picked up; that statement does not modify the array, but the likes property itself.

This will not react. MobX can only track observable properties, and 'postDate' has not been defined as observable property above. However, it is possible to use the get and set methods as exposed by MobX to work around this:

In MobX 5 this will react, as MobX 5 can track not-yet existing properties. Note that this is only done for objects created with observable or observable.object. New properties on class instances will not be made observable automatically.

This will react. Observable maps support observing entries that may not exist. Note that this will initially print undefined. You can check for the existence of an entry first by using twitterUrls.has("Sara"). So for dynamically keyed collections, always use observable maps.

Since MobX 4 it is also possible to use observable objects as dynamic collection, if they are read / updated by using the mobx apis, so that mobx can keep track of the property changes. The following will react as well:

This will react. Even though author.name is not dereferenced by the thunk passed to autorun itself, MobX will still track the dereferencing that happens in upperCaseAuthorName, because it happens during the execution of the autorun.

This will not react, during the execution of the autorun no observables where accessed, only during the setTimeout. In general this is quite obvious and rarely causes issues.

A common mistake made with observer is that it doesn't track data that syntactically seems parent of the observer component, but in practice is actually rendered out by a different component. This often happens when render callbacks of components are passed in first class to another component.

At first glance everything might seem ok here, except that the <div> is actually not rendered by MyComponent (which has a tracked rendering), but by SomeContainer. So to make sure that the title of SomeContainer correctly reacts to a new message.title, SomeContainer should be an observer as well.

If SomeContainer comes from an external lib, this is often not under your own control. In that case you can address this by either wrapping the div in its own stateless observer based component, or by leveraging the <Observer> component:

Alternatively, to avoid creating additional components, it is also possible to use the mobx-react built-in Observer component, which takes no arguments, and a single render function as children:

A common mistake is to store local variables that dereference observables, and then expect components to react. For example:

This component will react to changes in the author's name, but it won't react to changing the .author of the message itself! Because that dereferencing happened outside render(), which is the only tracked function of an observer component. Note that even marking the author component field as @observable field does not solve this; that field is still assigned only once. This can simply be solved by doing the dereferencing inside render(), or by introducing a computed property on the component instance:

How multiple components will render

Suppose that the following components are used to render our above message object.

MobX reacts to any existing observable property that is read during the execution of a tracked function.